In today’s post we’re going to create detections and hunt for the usage of the recent lateral movement technique called SCShell.

In a nutshell, the SCShell technique is born from the limitation of lateral movement attacks like remote service creation that required the attacker to drop files on the remote filesystem. Raphael Mudge’s post Covert Lateral Movement with High-Latency C&C explains how it is possible to create remote services to execute cobaltstrike’s beacon after transferring it to the target’s host. The aforementioned technique leaves considerable traces on the target host:

For reference, my post on lateral movement explains how to use remote service creation to compromise remote machines. SCShell, however, does not create a new service but modifies the binary path of an existing one to execute code. At an high level, the flow of the technique is the following:

The lab I used to practice with these detections is fairly simple:

Having analysed how the technique works, in my opinion the two actions where we can build detection on are:

I did a couple of experiments to build detection for this technique and I started using osquery’s service table to look at changes made to service’s configuration. What I did was creating a query pack in differential mode:

Differential mode means that osquery will output only the differences bewteen the last query and the current one. It seemed ideal and the output was something like the following:

I quickly realised how unreliable was this approach, with standard tables like services osquery takes only a snapshot of the current system’s status. SCShell however changed the configuration of the target service only for a couple of seconds, and therefore to have robust detection you would have to schedule the aforementioned query very frequently, with a consequent load on the monitored system.
osquery overcomes this by using his eventing framework, that allows you to queue events and send them as a result in the next scheduled query. Usually tables that ends with _events support the eveenting framework, but unfortunately for us, the service one doesn’t.

I decided to switch to Windows event log analysis using Winlogbeat and Elasticsearch; more specifically monitoring the event 4657 - A registry value was modified and analysing the value of the changed registry key allowed me to build a quite robust detection.

Before being able to receive event IDs 4657, you need to enable registry auditing. Why registry? Because every service’s configuration is stored under the registrty hive HKLM\SYSTEM\CurrentControlSet\Services: 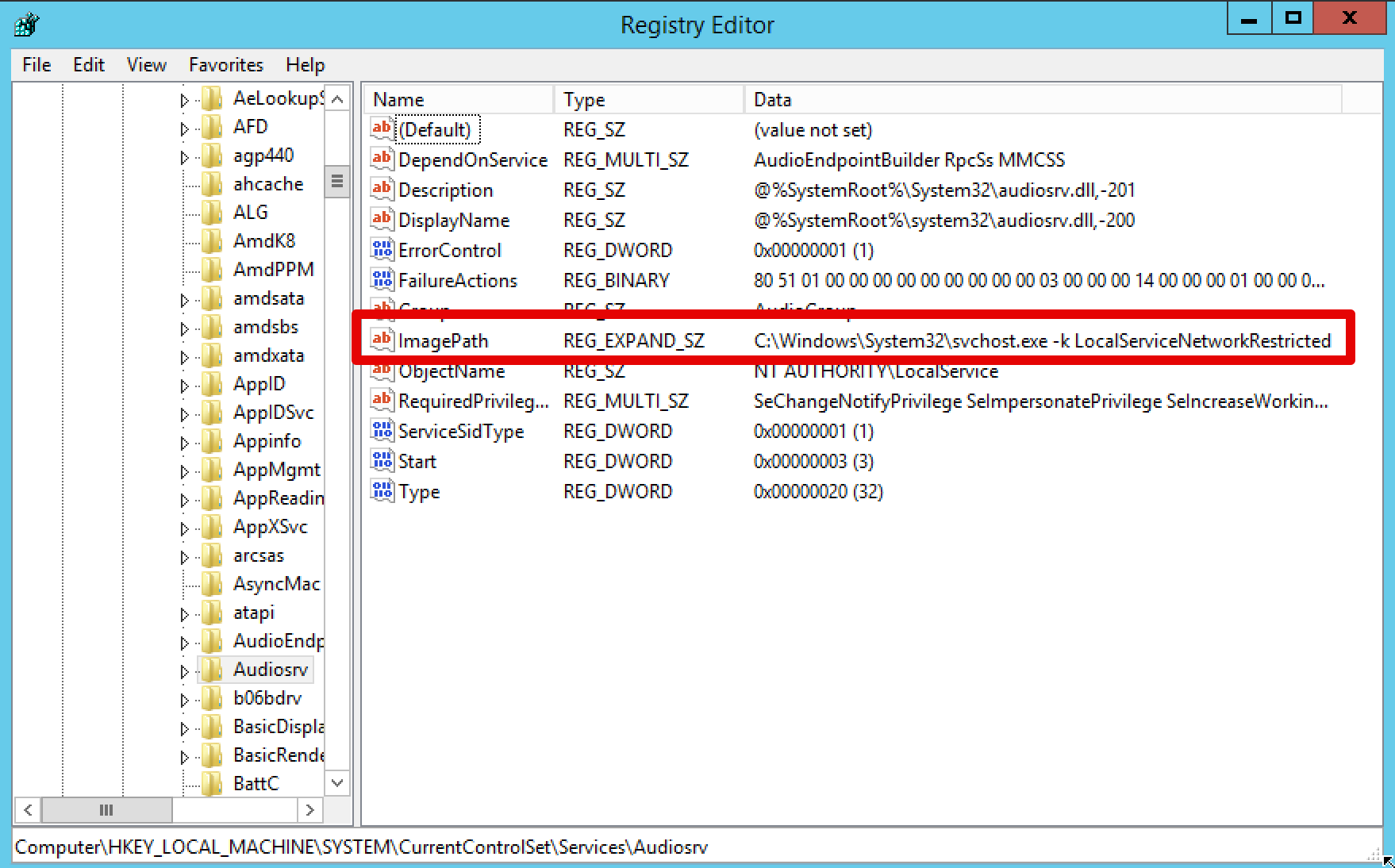 Monitoring changes in the registry under the Services hive would allow us to spot when a remote attacker will attempt to modify the configuration of a service.

To enable registry auditing you can follow a tutorial like this one. After setting up auditing for the registry keys, we can start hunting for the attack.

Let’s perform the technique from out attacking machine:

From out Kibana dashboard we can perform the following query:

adn as it is possible to see, we obtained some useful results:

Inspecting the query’s output we can see that the registry key value associated with the Audiosrv service were changed with a whoami command.

Additionally, SCShell by default uses the XblAuthManager service as a target, it would be possible to filter only for that service if the proposed query generates too much false positives.

As an addition, this is the sigma rule to detect this attack:

As every detection, it’s not perfect and catches only the default behaviour of the tool. In fact it would be possible to execute different commands instead of cmd.exe like powershell.exe, any other LOLBin used for code execution (msbuild etc..) or a webdav path that points to an executable. It would be then necessary to modify the query accordingly (not a very difficult task, left to the reader because of laziness)

A couple of points before finishing: